One of the gifts is an original, intact, brand-new collection, in eight volumes, of Italian popular music and songs from the 1920’s to modern times. Titled La Canzone Italiana (The Italian Song), the collection offers songs and music of the 1920’s and 1930’s covering the radio, the theatre, Italian jazz, and American songs in theatre, flims and musicals as assimilated in Italy.
Each decade from the 1920’s to modern times is represented by ten albums of songs for a total of 80 albums contituting a vertiable patrinomy of popular music. Some of the albums deal, for instance, with Neopolitan songs, the salons and Cabaret songs of the 1920’s to the 1950’s, the San Remo song festivals, the film songs of the 1930’s, and post-World War II songs. The eight-volume collection is accompanied by the four-volume critical analysis by experts on song, theatre, cinema, operetta, television, richly illustrated with beautiful iconographic commentary together with sections on practically every divo or diva of the theatrical, musical, cinematic and popular songs world.
In addition, Professor Pizziconi sent four reproductions of original archaeological artifacts in the Region of Abruzzon now kept in the Museum of the city of Boiano:
1) A pointed lance of Samnite origin dating from the VII century B.C.
2) A matrimonial fibula originating especially from Central Italy and assigned to the IX-X centuries B.C.
3) A votive image, a funerary fragment, dated as of the III century B.C.
4) A small fictile head of woman of the Etruscan origin, dated as of the VI century B.C.
5) A bronze reproduction in two tablets of the Tavola Osca (Ocacan Tablet), now kept in the London British Museum, a document which provides information on the language and religion of the Samnites. The alphabet, dating as of the III century B.C., has 21 letters, one more than the Etruscan, with the writing reading from left to right. The text offers an idea of the agricultural life of the times and of its religious cult and deities.
Also donated were a catalogue of Samnite artifacts with photos and description of each item, and a volume by Enrico Guidoni, titled I Tre Arcangeli: Leonardo, Michelangelo e Reaffaello. This volume offers a critical discussion of the portrayal by these three Italian artists of the three archangels: Michael, Gabriel and Raphael.
These latest gifts by Professor Luciano Pizziconi are a most welcome and important addition to the artistic and literary treasures with which he has generously endowed Binghamton University’s Library and Special Collections in recent years.
– Dr. Sandro Sticca, Professor of Romance Languages and Literatures, Binghamton University 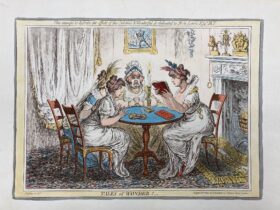 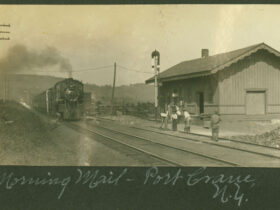