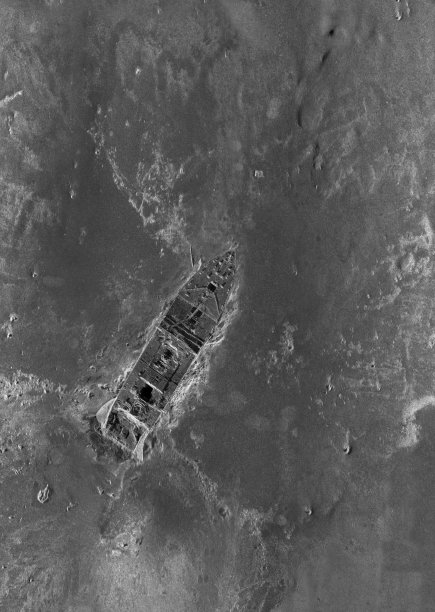 SOUTH PORTLAND, Maine (AP) — Researchers have pieced together what’s believed to be the first comprehensive map of the entire 3-by-5-mile (5-by-8-kilometer) Titanic debris field and hope it will provide new clues about what exactly happened the night 100 years ago when the superliner hit an iceberg, plunged to the bottom of the North Atlantic and became a legend.

Marks on the muddy ocean bottom suggest, for instance, that the stern rotated like a helicopter blade as the ship sank, rather than plunging straight down, researchers told The Associated Press this week.

An expedition team used sonar imaging and more than 100,000 photos taken from underwater robots to create the map, which shows where hundreds of objects and pieces of the presumed-unsinkable vessel landed after striking an iceberg, killing more than 1,500 people.

Explorers of the Titanic — which sank on its maiden voyage from Southampton, England, to New York City — have known for more than 25 years where the bow and stern landed after the vessel struck an iceberg. But previous maps of the floor around the wreckage were incomplete, said Parks Stephenson, a Titanic historian who consulted on the 2010 expedition. Studying the site with old maps was like trying to navigate a dark room with a weak flashlight.

“With the sonar map, it’s like suddenly the entire room lit up and you can go from room to room with a magnifying glass and document it,” he said. “Nothing like this has ever been done for the Titanic site.” 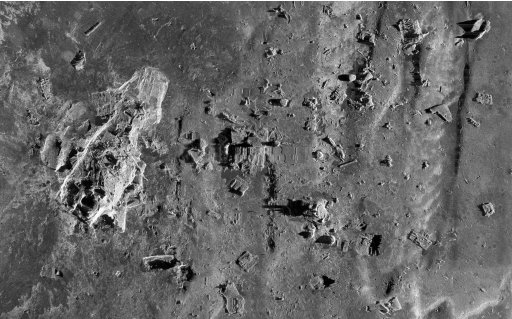 The mapping took place in the summer of 2010 during an expedition to the Titanic led by RMS Titanic Inc., the legal custodian of the wreck, along with Woods Hole Oceanographic Institution in Falmouth, Massachusetts, and the Waitt Institute of La Jolla, California.

They were joined by other groups, as well as the cable History channel. Details on the new findings at the bottom of the ocean are not being revealed yet, but the network will air them in a two-hour documentary on April 15, exactly 100 years after the Titanic sank.

The expedition team ran two independently self-controlled robots known as autonomous underwater vehicles along the ocean bottom day and night. The torpedo-shaped AUVs surveyed the site with side-scan sonar, moving at a little more than 3 miles per hour (4.8 kph) as they traversed back and forth in a grid along the bottom, said Paul-Henry Nargeolet, the expedition’s co-leader with RMS Titanic Inc. Dave Gallo from the Woods Hole Oceanographic Institution was the other co-leader.

The AUVs also took high-resolution photos — 130,000 of them in all — of a smaller 2-by-3-mile (3-by-5-kilometer)area where most of the debris was concentrated. The photos were stitched together on a computer to provide a detailed photo mosaic of the debris.

The result is a map that looks something like the moon’s surface showing debris scattered across the ocean floor well beyond the large bow and stern sections that rest about half a mile apart.

The map provides a forensic tool with which scientists can examine the wreck site much the way an airplane wreck would be investigated on land, Nargeolet said.

For instance, the evidence that the stern rotated is based on the marks on the ocean floor to its west and the fact that virtually all the debris is found to the east. 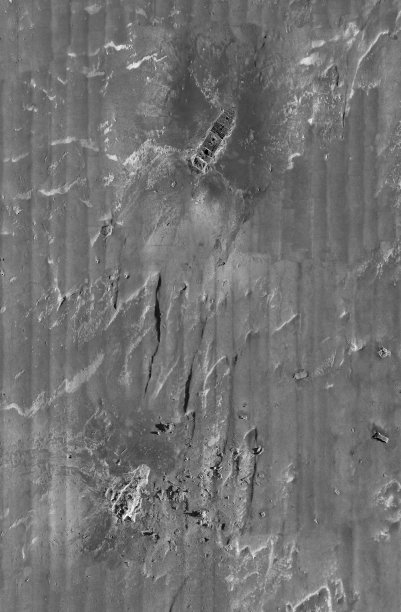 “When you look at the sonar map, you can see exactly what happened,” said Nargeolet, who has been on six Titanic expeditions, the first in 1987.

The first mapping of the Titanic wreck site began after it was discovered in 1985, using photos taken with cameras aboard a remotely controlled vehicle that didn’t venture far from the bow and stern.

The mapping over the years has improved as explorers have built upon previous efforts in piecemeal fashion, said Charlie Pellegrino, a Titanic explorer who was not involved in the 2010 expedition. But this is the first time a map of the entire debris field has looked at every square inch in an orderly approach, he said.

At Lone Wolf Documentary Group in South Portland, producers are putting the final touches on the History documentary. Rushmore DeNooyer, the co-producer and writer of the show, points out the different items on the map, displayed on a screen.

They include a huge tangle of the remains of a deckhouse; a large chunk of the side of the ship measuring more than 60 feet long and weighing more than 40 tons; pieces of the ship’s bottom; and a hatch cover that blew off of the bow section as it crashed to the bottom. Other items include five of the ship’s huge boilers, a revolving door and even a lightning rod from a mast.

By examining the debris, investigators can now answer questions like how the ship broke apart, how it went down and whether there was a fatal flaw in the design, he said.

The layout of the wreck site and where the pieces landed provide new clues on exactly what happened. Computer simulations will re-enact the sinking in reverse, bringing the wreckage debris back to the surface and reassembled.

Some of those questions will be answered on the show, said Dirk Hoogstra, a senior vice president at History. He declined to say ahead of the show what new theories are being put forth on the sinking.

“We’ve got this vision of the entire wreck that no one has ever seen before,” he said. “Because we have, we’re going to be able to reconstruct exactly how the wreck happened. It’s groundbreaking, jaw-dropping stuff.”