A carved redwood relief by the artist Sargent Johnson.

BERKELEY, Calif. — Everybody misplaces something sometime. But it is not easy for the University of California, Berkeley, to explain how it lost a 22-foot-long carved panel by a celebrated African-American sculptor, or how, three years ago, it mistakenly sold this work, valued at more than a million dollars, for $150 plus tax. 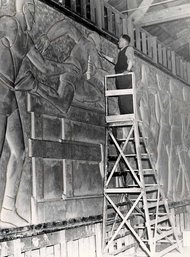 The circuitous tale of Sargent Johnson’s huge redwood relief involves error, chance and a partnership of unlikely art-world figures, including an art and furniture dealer who stumbled upon the panels at the university’s surplus store; an antiques dealer who was on a first-name basis with Michael Jackson and his chimp Bubbles; and a lawyer whose hobby is buying lighthouses and who convinced the government that even though the art was commissioned by the Works Progress Administration, it could still be sold publicly.

Harvey Smith, president of the National New Deal Preservation Association, called what happened a betrayal of the public trust. “We all pay for this art and we all own it,” he said.

“It’s hard to imagine losing something longer than a pickup truck,” he added, referring to what he called Berkeley’s “amazing incompetence.”

In correspondence with the federal government, Andrew Goldblatt, who has the stressful-sounding title of assistant risk manager for the university, described the sale of the Johnson piece as “an error of ignorance.”

“We do regret it,” Mr. Goldblatt said in an interview. “Something went wrong, and it just cascaded.”

Johnson (1888-1967) is considered one of the finest sculptors of the Harlem Renaissance, though he spent most of his life in the Bay Area. He was never able to earn a living purely from his art, but in recent years interest in him has resurged, said Gwendolyn DuBois Shaw, an associate professor of American art at the University of Pennsylvania, who is writing a book on him. In 1937, under the auspices of the W.P.A., Johnson designed two large Art Deco redwood reliefs, one of which depicted an idealized natural world of gilded gazelles, open-beaked birds, spiky-leafed plants and a boy clapping cymbals.

Designed to cover organ pipes at the old California School for the Deaf and Blind in Berkeley, this natural-world relief was affixed to a wall until 1980, when the school moved. As squatters (and rats) took shelter there, the university, which had taken over the premises, moved any valuable property to a secure basement warehouse, and the organ relief was disassembled. But one of the organ screens was misidentified as belonging to Berkeley’s graduate schools, so when the university reopened the building three years later, only one of the two Johnson reliefs was returned to its rightful place. The other remained in storage until 2009, when the university emptied the storage space in preparation for the sale of the building and transferred the relief to the university’s surplus store.

That’s where, in late summer of that year, Greg Favors, an art and furniture dealer, came upon eight cracked but still handsome panels in a plywood bin. Mr. Favors did not know what they were or who had created them, but he thought them “amazing and cool,” he said. He paid $164.63, including tax.

In need of a restorer, he contacted Dennis Boses, owner of Off the Wall Antiques in Los Angeles, who has provided eye-popping objects for celebrities like Jackson and for flashy restaurants including the Hard Rock Cafe and Planet Hollywood, and who has been an expert on the popular A&E reality show “Storage Wars.” Mr. Boses trucked the panels to his warehouse in North Hollywood, where he restored them. He was hoping the art might fetch $10,000 to $11,000.

On Oct. 16, 2009, at 9:03 a.m., he e-mailed Gray Brechin, a Berkeley scholar of historical geography who specializes in New Deal art, asking for help.

At 9:08 a.m., the response arrived: “You BOUGHT this? They SOLD it?” He identified Sargent Johnson as the artist and added, “I am astounded that they deacquisitioned it.”

Armed with that information, Mr. Boses spoke to Michael Rosenfeld of the Michael Rosenfeld Gallery in New York, an authority on African-American art. Mr. Rosenfeld was relieved to learn that the piece had not been chopped for firewood or turned into a trellis. He recalled telling Mr. Boses, “In the unlikely event you get a release from the G.S.A, I would buy it.” (Mr. Rosenfeld was referring to the General Services Administration, which is the official custodian of artwork produced under the aegis of several public programs during the New Deal and is working with the F.B.I. to recover misplaced or stolen art and have it displayed in public locations.)

For help in getting clearance from the agency, Mr. Favors turned to his friend Bradley Long, whose e-mail handle, bradcansell, suggests that no transaction is beyond his abilities. And Mr. Long, through his mechanic at Benz Autobody in Redwood City, Calif., met Michael L. Gabriel, a lawyer whose hobby is buying lighthouses from the General Services Administration. Mr. Gabriel found a loophole in the laws governing W.P.A. art.  Movable art from the W.P.A. falls under federal jurisdiction. But according to a November 2010 e-mail from a General Services Administration lawyer to the university, which Mr. Smith of the National New Deal Preservation Association obtained last month through a California Public Records Act request, the federal government does not retain ownership of W.P.A art affixed to nonfederal buildings.

Jennifer Gibson, director of the General Services Administration’s art in architecture and fine arts program, said in an interview that despite the ruling, her agency hoped Johnson’s work would go “to an institution that provides public access.”

The University of California, Berkeley, tried to be that institution. It hired appraisers who valued the Johnson work at $215,000 but, facing extensive budget cuts, it did not have the money to make a deal. Late last February, Mr. Rosenfeld bought the Johnson relief for what two of the partners said was $225,000.

But the art didn’t even make it to Mr. Rosenfeld’s New York gallery. One week after his purchase, Jessica Todd Smith, curator of American art at the Huntington Library, near Los Angeles, and John Murdoch, the museum’s director of art collections, paid Mr. Rosenfeld a visit, looking for works to fill their newly expanded American galleries.

The Johnson panel had not yet shipped from the North Hollywood warehouse, so Mr. Rosenfeld showed them photographs. On her first day back at the office, Ms. Smith visited the warehouse to see what she called “Johnson’s monumental work.” She added that it “confirmed and surpassed our expectations.” It became the year’s first acquisition of the Huntington art collectors’ council.

Ms. Smith declined to divulge the price. Mr. Rosenfeld, who said he had sold small Johnson sculptures “that you can hold in your hand” for more than $100,000, said the relief was worth over $1 million, but that the Huntington had paid considerably less. He didn’t seek market value, he said, because the work was so important that it belonged in a museum. (Lowery Stokes Sims, a curator at the Museum of Arts and Design in New York and an authority on African-American artists, called Mr. Rosenfeld’s assessment “no exaggeration,” and said it was not unusual for a gallery to sell an important work to a museum at a discounted price.) When the Huntington’s new American wing opens, in 2014, Ms. Smith said, “you will be able to open the doors to the gallery and see it at the end of the vista, holding down the wall.”

Nonetheless, Mr. Smith of the National New Deal Preservation Association is unforgiving, saying that the university, in its role as steward of this art, exhibited a “total disregard for our country’s artistic legacy.”